If it wasn’t for a Romanian shipping tycoon, Simona Halep may never have become one of the world’s best tennis players.

Growing up in the Black Sea town of Constanta, Halep was in need of international competition to advance her tennis career.
Corneliu Idu came to the 14-year-old’s rescue — and she has gone on to reach the 2014 French Open final, and climb as high as No. 2 in the rankings.
“It was incredibly expensive, I only had my parents as support and no sponsors,” Halep said in an interview at this month’s Dongfeng Motor Wuhan Open in central China.

Unlike the four grand slam nations, whose wealthy tennis federations all have funding programs for young players, there was no financial support for the Haleps from the underfunded Romanian tennis association.
Idu, one of the wealthiest men in Constanta, was the owner of the Tenis Club Idu, where Halep played.
His money helped her enter events on the European junior circuit for two years up to the age of 16.
“That was it, I didn’t have any other sponsors,” said Halep, now 25. “My parents did their best to get me to where I am today, but it was good for us we had that help.”

Some people play not to lose. I play to win each and every second I’m on court. #SpeedTakes aggression. pic.twitter.com/ae5xlriogs

With Novak Djokovic this year becoming the first man to earn more than $100 million in prize money and Serena Williams the world’s best-paid female athlete with close to $29 million in total annual earnings, according to Forbes, it’s easy to think tennis is a highly-profitable sport.

Although Idu’s bet on Halep worked out well — she is now ranked fourth in the world and has made more than $11 million in prize money — the cost of becoming a tennis pro can be prohibitively expensive.
READ: How a smart court helped Simona Halep become a better player.
Developing a player from the age of 5 to 18 can cost around $306,402 (£250,000) according to the British Lawn Tennis Association. This makes support from parents, sponsors, investors or national federations increasingly important — and puts kids under more pressure to perform.
With teenage grand slam champions becoming a rare sight as players now tend to peak in their 20s, as they are working more on conditioning and injury prevention, expenses for parents and tennis federations are going up.
READ: Bjorn Borg on today’s “crazy tennis parents.”

Half of all pros make no money

And even if you do make it as a traveling pro, the reality is that almost half of a total of close to 14,000 men and women who play professional tennis make no prize money at all, according to a 2013 survey by the International Tennis Federation.
Unlike professional soccer players, who earn a fixed weekly wages, tennis pros are independent contractors who mostly have to pay for anything from coaching to travel and food and accommodation themselves.
The ITF estimated the average annual cost of playing pro tennis at $38,800 for men and $40,180 for women (without coaching).
The cost of developing the next Serena Williams or Djokovic can really skyrocket if you enroll your child in a tennis academy.
Former Australian Open semifinalist Madison Keys says her parents — both attorneys — paid for her tuition at an academy run by 18-time major singles champion Chris Evert in Boca Raton, Florida between the ages of 10 and 13. She estimated the annual fee was between $40,000 and $50,000 a year.
READ: Madison Keys on working with her new coach.

Keys vividly remembers the sacrifices that were made for her tennis career, including uprooting the entire family including three siblings to Florida from Minnesota so she could enroll in the Evert Tennis Academy at the age of 10.
“It was not an easy decision,” the seventh-ranked Keys said in an interview in Wuhan. “My mom did not want me living in a dorm. My mom was like, ‘I don’t want a 15-year-old raising my 10-year-old.’ It was tough for my sisters and it was tough for my mum. She left a job that she really enjoyed doing, and my sisters obviously had been going to school.”
Keys, who broke into the top 10 this season and has already made $3.3 million in career earnings, said things became easier financially when she signed with Nike at the age of 14.
“The money that I got from my Nike contract went toward my tennis,” she said.

The Rafa Nadal Academy, which opens Wednesday on the Spanish island of Mallorca, charges $62,000 (€56,000) a year for budding tennis pros. That includes tennis training (€26,500), accommodation and food (€19,000) and enrollment at an American International School (€10,500.)
“We created a great group of coaches and all the infrastructure and everything that a kid needs to be in the best hands possible in terms of preparation, attention in all aspects,” Nadal told CNN’s Open Court show in an interview at his academy in his hometown of Manacor. “We have more than what a kid really needs.” 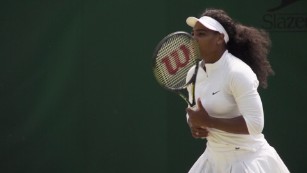 Serena Williams’ coach makes predictions 02:54
A similar program at the recently opened Mouratoglou Tennis Academy in Nice, France will set you back $60,000 (€54,250) a year, while the IMG Academy in Florida founded by Nick Bollettieri charges $75,900 for tennis training and private tuition at high school age.
READ: Serena’s coach aiming for 30 slams

Although the fees are high, it’s money well spent as playing sports at a high level will give you important life skills and can enhance your education, according to Patrick Mouratoglou, the coach of Serena Williams who has helped 40 players reach the top 100.
One-third of the 150 full-time students at the Mouratoglou academy end up at with a scholarship at an American university.
Visit cnn.com/tennis for more news and videos
“The school is as important as the tennis,” Mouratoglou said in an interview this year in Melbourne, Australia. “If you are a responsible person, you have to realize that a lot of players are not going to make it. So those ones have to have a second option that is a good one.”
Want your kid to become a tennis player?2016-10-242018-08-06Mike Jameshttps://mikejamessports.com/wp-content/uploads/2017/12/7.jpg200px200px
Recent Posts