Alexander Zverev is showcasing an extraordinary mix of talent and intensity at an impressively young age, while he still has massive room for improvement along with a real shot at greatness.

As a tennis analyst, I have never been a big fan of forecasting the future, given also the enormous complexity and potential diversity of the tennis world. Countless factors can influence a player’s results and career. From his shot-making abilities to his physical development and mental approach to the game, setbacks are always around the corner. In spite of this skepticism, I couldn’t agree more with Rafael Nadal when he said that “Alexander Zverev is clearly a future No. 1. He’s an amazing player. He has all the shots.”

I had the opportunity to witness a practice session between Zverev and Nick Kyrgios during last year’s Australian Open and I was absolutely impressed by the Hamburg native’s remarkable talent. A few days later I also watched him practice with the legendary Roger Federer in front of great hordes of devoted fans that gathered around court 18 at Melbourne Park. Federer is known for distinctively selecting his training partners based on exceptionally high standards and his decision to practice with young Zverev was definitely not a coincidence. Their practice session was absolutely stunning. Both players were striking the ball beautifully and to everyone’s surprise it was the German teen-ager that looked the most powerful and explosive of the two.

In any case, when two of the greatest legends in the history of our sport predict that a player is destined to become a champion of the highest caliber, their opinion can’t be underestimated. From a technical point of view, Alexander Zverev has all of the qualities that could potentially take him to number one in the world if he manages to remain both physically and mentally healthy throughout his career. In my opinion he could be sitting at the top of the rankings within two or three years from now.

The German is as technically flawless as his next-gen rival Dominic Thiem. We definitely look forward to plenty of epic battles between the two rising stars in the future. Alexander’s best shot has always been his impeccable two-handed backhand, although his forehand has impressively improved during the last season and has now become equally smooth and effective. His first serve is usually a bomb clocked at 200 km/h and his second serve has tremendous spin and accuracy. His athleticism still remains a minor question mark and it is interesting to see how this young man will manage his muscle growth in the next few years. Despite his 6′ 6″ height, his coordination is already outstanding and relies on excellent footwork.

His crazy talent sometimes reminds me of Martin Safin. In the vein of the great Russian player, Zverev can easily produce sudden injections of pace, consistently seize opportunities both cross-court and down-the-line, effortlessly hit inside out winners and construct successful plays from seemingly defensive positions.

For many years we asked ourselves what Marat Safin could have achieved in our sport if only had he applied a more disciplined work ethic to his training regime. I personally think that the answer to that question will be Alexander Zverev. There are certain qualities that differentiate a champion from other players, either you have those qualities or you don’t. And Zverev has them all. Compared to other fast rising stars, he seems to be ahead of his contemporaries, particularly with regard to the mental part of the game. I am convinced that sooner or later someone like Nick Kyrgios will be perfectly capable of winning a Grand Slam title, but I have a hard time imagining him sustain a high level of performance throughout an entire season. Zverev is quite the opposite and his commitment is second to none. His older brother Misha – a former top 50 player – probably played a key role in Alexander’s development on the ATP tour and taught him how to maximize his potential. 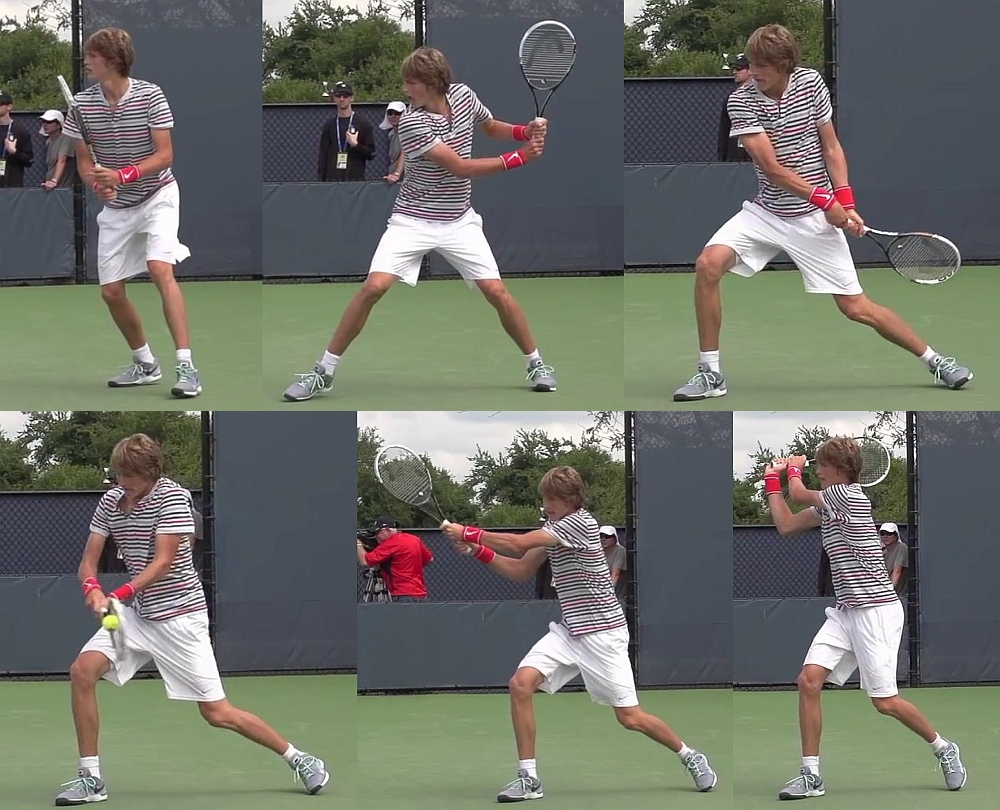 Let’s take a closer look at Zverev’s game. His two-handed backhand is pure perfection: A combination of continental-eastern grips, perfect left foot rotation, powerful right foot support and good roundness. His weight is horizontally transferred from the knee to the ball along with a precise 90° shoulder rotation. His follow-through is extremely accurate while the bottom portion of his racket handle is precisely looking in the direction of the shot. 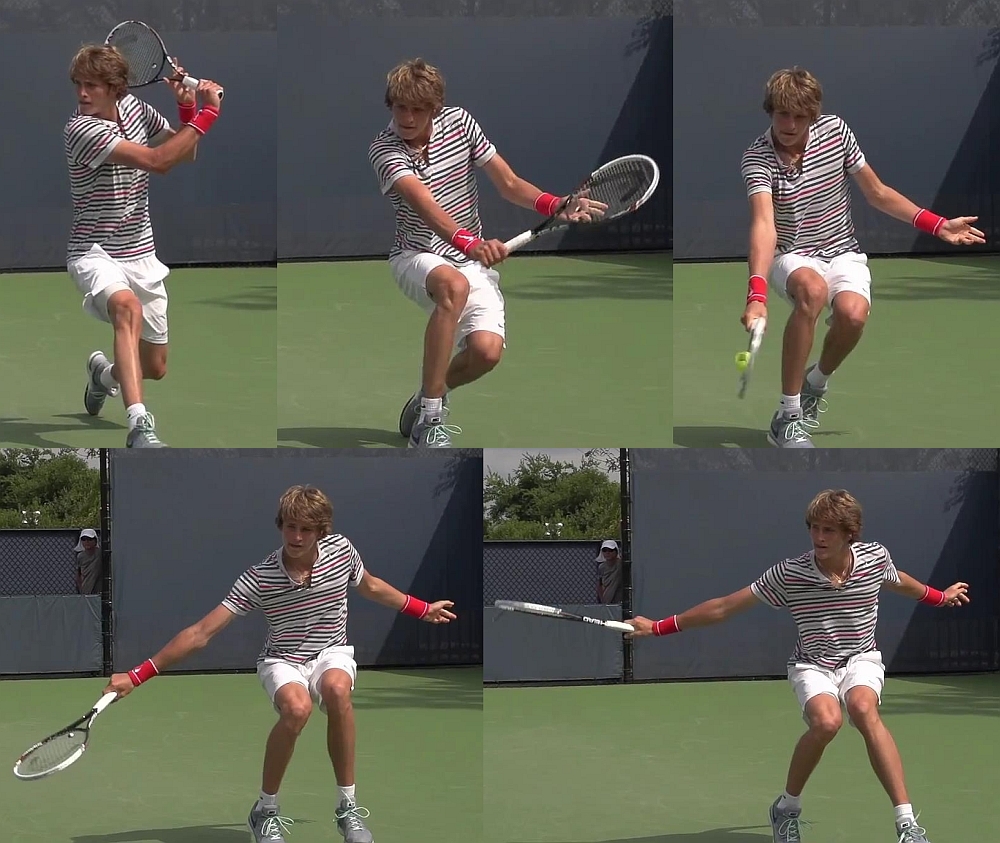 Alexander can master his slice backhand with ease. He has the ability to stay low while maintaining his coordination from a lateral recovery position. His racket head movement from a high to low direction is impeccable and leads to a horizontal-forward finish. His left arm action is symmetrical with the right arm and his knees are bent while keeping a low center of gravity. In the upper right frame, the ball is probably 12 inches from the ground; if we look at his point of contact, we can see that his racket is as low as his mid-calf. This allows him to slice the ball with simplicity despite his 6′ 6″ height. 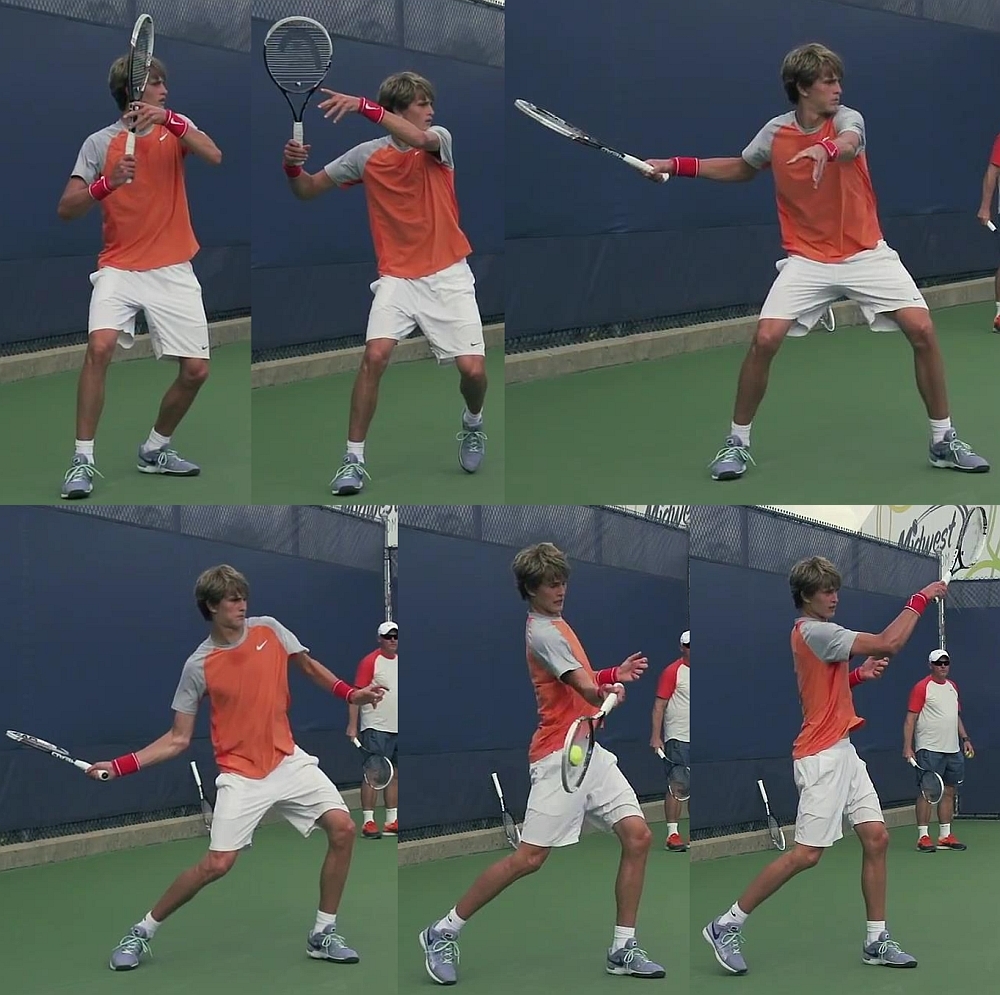 Alexander is hitting a forehand with vertical swing, semi-open stance and western grip. His weight is transferred from the right to left foot while his left hand is used to balance the racket, which is held vertically in order to unleash the head and begin the backswing. The middle frame at the top is capturing the moment in which his racket is going backwards and body weight is on the right foot, while his left foot is slightly raised. The middle frame at the bottom is showing the point of contact while his body weight is entirely on the left foot. His right foot is projected forwards following the hip and knee entry. 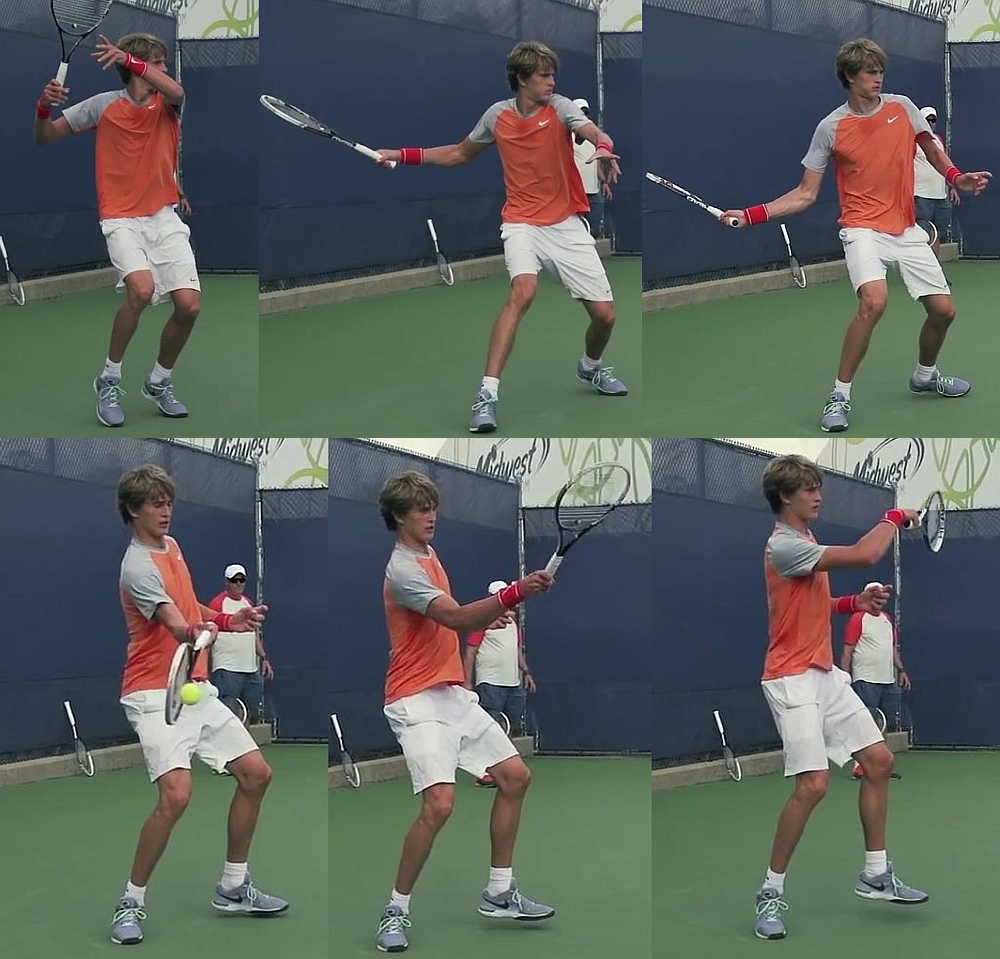 Alexander is hitting a forehand from an open stance. In the upper left frame, we can see that his left hand has just abandoned the racket while kicking off the backswing. Both feet are about to align parallel to the net. Subsequently, his body weight is transferred to the right foot; his left foot is first dragged sideways before coming up off the ground at the point of contact in order to balance the action of his hip and right knee. His left foot will touch the ground again at the conclusion of the final “windshield wiper”, which here is much more pronounced than in the forehand with vertical swing that we discussed before. In summary, Alexander can easily play a forehand down-the-line with little spin from a semi-stance as well as with full top spin from an open stance. Remarkable to say the least.

Here is a very interesting detail concerning Alexander’s right foot during his service motion. His technique is known as “foot-up”, which means that his rear foot is taking a small step forward during the action. In the middle frame, as soon as the ball is tossed up in the air, his body weight is on the left foot. His right foot is beginning to move forward with a slight external tip-toe rotation until his heel is touching the front foot.

Immediately after hitting his front foot with the right heel, his right foot is “bouncing back” with a rotation towards the inside, and is leaning parallel to the left foot. In the middle frame, Zverev is bringing his right knee towards his left knee while his shoulders are still wide open and his motion is reaching the “trophy position.” His body rotation continues to point vertically while his legs and right shoulder are joining the action at the last moment and all of this energy is powerfully transferred up to the point of contact. In this regard, Zverev vaguely reminds me of Karlovic, who is a master in using the strength of his shoulders thanks to his tall height. 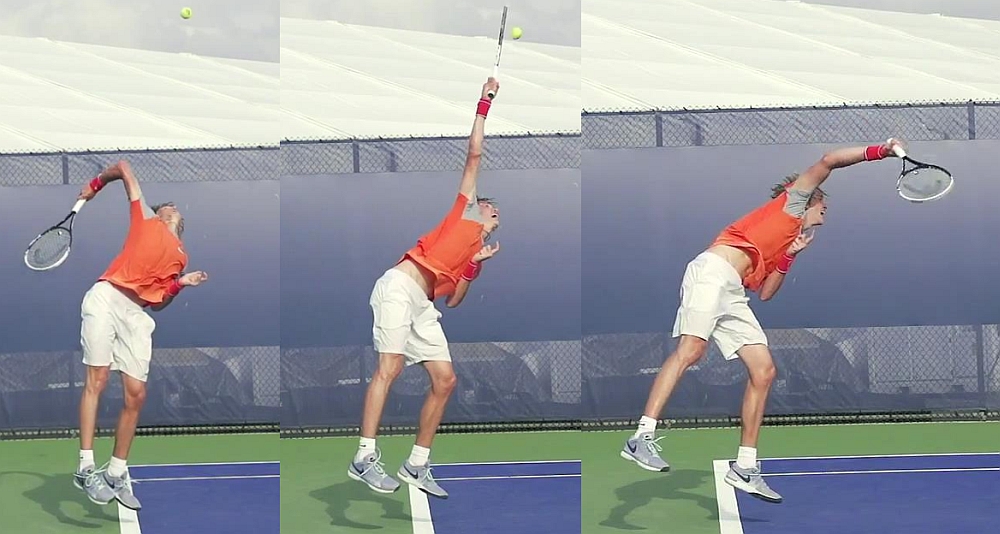 Here is the beautiful conclusion of Zverev’s service motion, with a strong and fast pronation of his wrist and forearm while his arm/racket, hip and left foot are perfectly aligned at the point of contact (middle frame). A truly top class serve.

In order to analyze Alexander’s footwork and court coverage, it is interesting to watch this video from last year’s US Open. Dynamic split steps, extremely quick cross-steps, powerful strides from defensive positions, lightning recovery toward the center of the baseline and incredibly low balls retrieving are only a few of the great qualities that stand out in Zverev’s athleticism. Marat Safin was an outstanding tennis player, but he could only dream of moving as well as Zverev does. We are witnessing the rise of an extremely talented 19 year old who plays with incredibly easy power, shows great composure in pressure situations, flies around the court with an efficient footwork, trains as hard as anyone and has a cool head on his shoulders. As soon as he adds more muscle to his frame and gets more experience under his belt, tennis will surely have a new multiple Grand Slam champion.